Goodbye Chloe, you were there in the best of times…and the worst of times, if only our pets could live longer 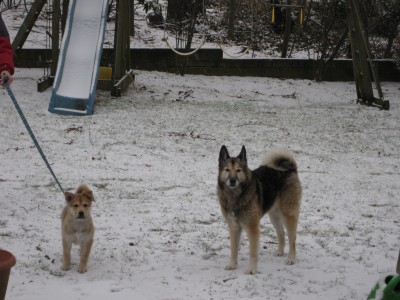 Miss Chlo, how I will miss you, how we will all miss you.  You lived a long life in dog years. This March 25th would have been your 15th birthday.  Up until only a few months ago when your walking was off and your eating was off (a definite sign something was wrong), we were sure you were going to make it to that birthday and do your usual singing (wolf howl), to the harmonica that you always sang to during every birthday celebration…you were such a good singer.  Fifteen years in people years is not that many years, and yet in some ways it kind of is; Rachel was almost two when we adopted Chlo and next year she’ll be finishing High School.  Jamie was in the fourth grade (if that), and now she’s working at a real job.  Jon and I too feel older. There’s so much that’s happened in the family and in the world.  Everyone has been growing up, growing older, but Chlo always seemed youthful…she was like our other child, but she didn’t grow up.  Animals can be so good at hiding their age.  Also, they’re always there. Miss Chlo was there while I was sick.  So often I couldn’t even get out of bed…she may not have been able to run errands, but she was there, and her company meant everything to me.  I can’t believe I won’t have her company anymore.  She seemed ever present.  I will miss how she seemingly barked at everyone and everything. Sure it was annoying at times, like when we were on the phone for instance, but it was so “her”. She was not a quiet soul.  She barked at our friends who’d come to our house to visit, it didn’t matter that she had seen them many times before.  She would bark like she was the “grand protector” when they were outside the front door, and as soon as they would come inside the house, she would treat them like they were her best friends. For people meeting her for the first time, it could be quite the scary experience, but once they got to know her, they realized what a mushball she was and that she was actually just giving them a grand HELLO.  She would bark the same way at people who would come to fix things in our house. They of course would be afraid.  After all, you hear all the time about how dogs attack house visitors.  Chlo was not a huge dog, but at her peak, she probably weighed about 45 pounds, and she looked like she meant business-you wouldn’t want to mess with a dog who meant business.  We would tell the “fixers” not to worry, that she just liked to bark. Once they walked into the house, she’d treat them too, like they were her best friends…like she had known them for years.  She barked for the leftover milk I had after I had eaten my cereal every morning.  If I didn’t eat cereal, she barked as if to say, “where’s my cereal?” I would then go and serve it up to her.  She barked for Jon’s bagel in the morning, and even if he wanted to eat the whole bagel, he would give some of it to her of course…sometimes more than just some of it.  She had us all trained to feed her what she wanted, and she wanted most things…except her Dog Food.  Her Dog Food was for dogs.  She barked at the mailman, at squirrels, at cars, at trucks, at motorcycles, at other dogs…she didn’t really like other dogs.  We think she saw herself as a person.  Four years ago we introduced her to a new friend.  We decided to adopt another dog because we worried about this day when she would no longer be here. She barked at this new puppy. The puppy, who is now 85 pounds and became almost twice Chlo’s size.  Max grew to love his motherly barker, and we think Chlo just kept wondering when he was going to go home. Now Chlo is gone, she is gone too soon. Max the puppy, is 4 and we think he wonders when she’s coming home. We’re especially glad Max is here now, and Chlo did pass down her lesson about “how to bark at the mailman”. The fact is that our beloved pets don’t live long enough, it wouldn’t matter how many years it would have been.  We all miss Chlo’s barking, the house is weirdly quiet now, it’s going to take a while to get used to this quietness. We miss her beautiful face.  I can’t believe I won’t ever be able to touch that beautiful face again.  I have a lock of her fur, I have her pictures, but I so miss her.  She was the best Miss Chlo there was!  See you in my dreams Miss Chlo. Love you so much. You were such a good friend. 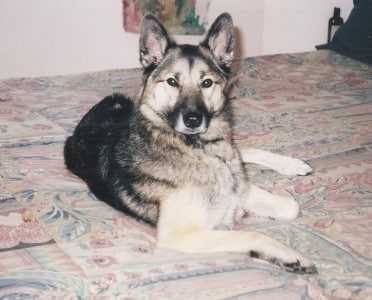