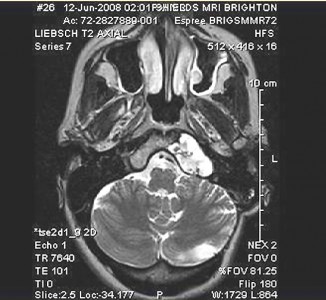 Meet Mr. Dubenschmeimer, so named by my 12 year old daughter Rachel. This tumor has been a presence in her life as long as she can remember, and I guess she felt it should have a name. Anyway, it sort of fits. It’s a serious name, without being so formidable that you couldn’t take it down in a fight.

Mr. Dubenschmeimer is rude, he has definitely overstayed his welcome. He’s intrusive. He leans on the carotid artery, and bangs into all his neighbors (the cranial nerves that I need to see, hear, swallow, speak). He gives new meaning to the phrase from the song “Getting to Know You”, he has definitely “become part of the furniture”, he in fact has become the furniture. Mr. Debenschmeimer has invaded the skull base so totally, that he actually has become the skull-base, which is why he can’t be removed, so instead he will become something closer to petrified after the radiation.

Mr. Dubenschmeimer is that fairly large (to be inside your head, anyway), irregular shaped bright white mass on the right side of this picture. Wish I had a pointer, but you will figure it out I’m sure.