A few weeks ago, Chris Collora from Patch.com in my hometown of Port Washington, NY, called to do a follow up story on the Walking Miles 4 Brain Matters. I have to put a shout out to Chris and Patch, they’ve been very supportive to Brain Matters, and to all that we’re trying to do to raise awareness for the cause.  I met Chris around this time last year, which was several months before the walk started in October. I knew then I still had quite a lot of planning to do and I was prepared for that, but I wasn’t prepared for several other things. Noooo…prepared isn’t the right word, I hadn’t “anticipated” some other things. I hadn’t anticipated how competitive the world of giving would be; for instance, how does a donor decide which cause would be best for them to donate to? Many donators have a personal connection to a cause, and that I totally understand.  That’s why I’m doing what I’m doing. Many others are not as connected to a particular cause- they’re charity neutral, they’re just as likely to donate to one charity over another, depending on how much information they learn about that charity…and other things…those attention grabbing things are perks and giveaways.  The world of charity can be a dog eat dog world. I learned that the charity that is the most advertised, with the most perks, may often be the “donation winner”. However, as someone who now lives on both sides of the fence, both giver and givee-I know it’s important to understand more about where your “charity” dollars are going…often a good amount of your donation depending on the organization, might be going towards advertising and promotion…towards t-shirts, posters, skywriting, TV and magazine advertising, bracelets, hats, towels and necklaces. There’s some very imaginative stuff out there, but it may not be curing the cause! If all this is going towards creating a bigger name for the organization, how much is going towards research, potential vaccines, pharmaceuticals, better surgical techniques, patient advocacy, or education, which is where a good portion of Brain Matters’ funds are going? The Brain Matters documentary that we’re still filming and need further funding for, is all about educating people about cancerous brain tumors. We want people to learn about this cause through survivors and their stories, through the family members whose loved ones didn’t survive, through my own story and the walk, as well as through doctors and the amazing medical research they’re doing…research there could be even more of, if there was more funding for the cause. I believe this is a good use of the donations we receive. This isn’t to say that these large organizations, don’t donate to these other things, but it was interesting to find out the percentage of people that donated to large organizations, and how attractive apparently it is to them to receive this logo-bearing apparel. It’s partially because of these perks that many of these organizations are as large as they are, and the donators are in essence paying for these items.  They’re not free. It made such an impression on me, that I now offer a t-shirt to donors on the Brain Matters website as well. I found that there were those donators that wanted a t-shirt. There were also those that passed on the t-shirt offer, preferring that the money instead go entirely to the cause.  The ones that ordered the t-shirt told me they ordered it because they wore it proudly and they felt it promoted the cause.  Point taken.  Since I only offer a t-shirt, it’s a win/win for Brain Matters. Another thing I hadn’t anticipated was the business of charity. I thought if everyone was working for the same cause, that even though we had different “businesses”, we still worked with each other…it was a little bit less comraderie than what I had imagined it would be. Let’s put it this way…some very much do, and some really don’t. The other thing I’ve learned-I’m sure this will be an ever-growing list…this learning list…and I shouldn’t be surprised by this next thing, since I’ve spent many years working in the world of advertising-that is that company sponsors as well as personal donors gravitate towards larger charities, because then they themselves become more visible and acknowledged as sponsors/givers, when they donate to these larger charities. But the biggest lesson I’ve learned so far: is you keep doing what you’re doing because you believe in it-it’s a passion! It ain’t easy getting people to know things you think they should know, and to have them donate to a cause that needs more funding…especially a small one like Brain Matters.  For me anyway, there’s no throwing in the towel.  It’s personal. I’ve lived many years with a brain tumor. I know other people who have or had a brain tumor. I meet other people all the time now, who have a brain tumor-some of them keep on going, most of them haven’t been able to keep going.  Many of them have died.  I just wish on some days it was a bit easier, or I had a few more of “me(s)”. It helps to have people like Chris and Patch understand what Brain Matters needs-people who are helping to get the word out there about this enormously important cause. Stay tuned for the next steps on the road. Please donate. Maybe buy a t-shirt 🙂 Check out my recent Patch interview: 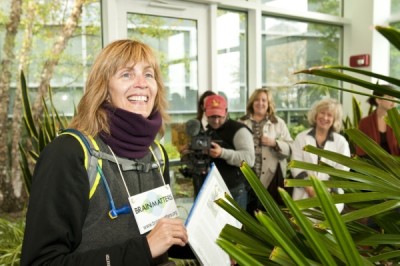